When Ernestina Cabral’s son, Alfredo, was old enough to start kindergarten, she enrolled him in their local public school in inner city South Bend, not giving it a second thought. 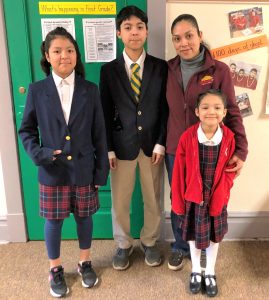 Ernestina Cabral and three of her four children

“I didn’t have much money, so it wasn’t like I had any other option than the school down the road,” Cabral said. “But when Alfredo started coming home with a bad attitude and repeating bad words we don’t use in our house, I wanted to figure out how to get him out of there.”

Cabral knew she couldn’t afford to send Alfredo to a private school, but she wanted to look at her options. She had to try something different because she wanted a better educational environment that would work best for her child. After asking around, she learned about St. Adalbert Catholic School, an A rated school located on South Bend’s working-class west side, where the front office told her about the voucher program.

“When they told me I might be able to send Alfredo, and eventually my other kids, to a small Catholic school, I knew God sent this to me,” Cabral said.

Another St. Adalbert mother, Alejandra Vazquez, agrees. She told INPEA, through Spanish translation, “The personal attention they give my kids at St. Adalbert is incredible, but more than anything else, the teachers here have given them a love for education. My oldest son is now a straight-A student at St. Joseph High School because of his foundation at St. Adalbert’s.” 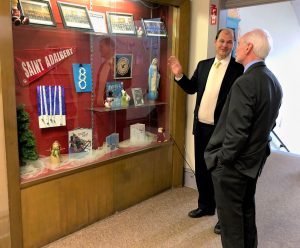 More than 90 percent of St. Adalbert students attend on a voucher. “I can’t see how we could provide a working school for these kids without the voucher program,” said Joe Miller, principal at St. Adalbert. “We are in a very poor area, and because of the program, a lot of our kids are now able to continue on to St. Joseph High School who has a 100 percent graduation rate.

The now mostly Mexican immigrant community there are living in poverty. “Most of us didn’t finish high school because we had to start working,” Cabral said. “It used to be ‘you get what you get’, that’s it. Now, my kids get to dream higher than I could. I work in a factory. I didn’t dream of working in a factory as a kid, but a lot of us didn’t dream at all because we didn’t know we could.”

“Indiana’s Choice Scholarship program is more than just a program,” said John Elcesser, executive director of Indiana Non-Public Education Association. “It impacts the lives of kids and families more than some can understand. It’s easy for people to say, ‘I don’t like vouchers.’ But if those people could just meet families like Alejandra’s and Ernestina’s and see how they’re benefiting and how huge the need is in areas like this, they wouldn’t be able to deny its value or they would clearly see that it’s a lifeline for these families.”

Cabral’s kids have been through a lot at home, so having a safe and loving environment for them at school has helped them through their family issues.

“Alfredo is getting ready to go to high school and he doesn’t have a father figure at home,” Cabral said. “For me, the school community is a family here and was so helpful as a single parent because I can’t do it alone. I want my children to have good hearts, have mercy and help others, and the teachers at St. Adalbert’s help make my children better people. The voucher program literally saved my children’s lives.”