Roncalli sophomore advocates for herself, other deaf students at Indiana statehouse 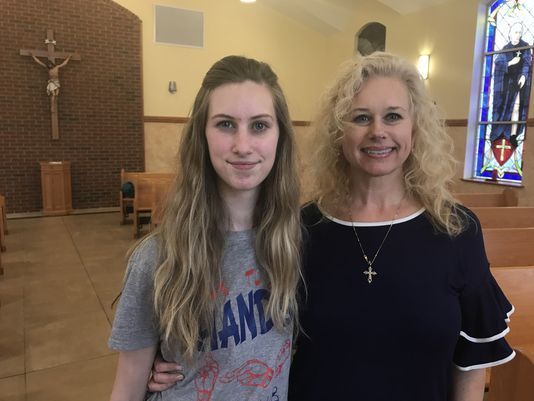 Paige Moore knows what she wants. The 16-year-old Roncalli student wants to go to an Ivy League school after she finishes high school in two years, hence the advanced classes she takes at the private, Catholic college prep high school on Indianapolis’ south side.

Like every other high school sophomore, Paige is busy. She’s learning how to drive, she started a new club at Roncalli and is on the cross country team.

Lately, she’s also been making trips to the Indiana Statehouse.

Paige and her mom, Keri Moore, are lobbying for House Bill 1420. It would, in part, allow students at private schools to access services provided by the Indiana School for the Deaf in the same way as public school students.

Paige has Meniere’s disease, which has left her entirely deaf in her right ear and with moderate hearing loss in her left ear. Eventually, she will be completely deaf.

She’s able to use hearing aids, which help. But, communication is still a constant challenge for Paige.

That’s especially true at school. Her teachers wear a transmitter that sends sound directly to Paige’s hearing aids, but it doesn’t pick up what other students say in class or during group work.

Good school that it is, there are things Roncalli can’t provide for Paige.

Because, in addition to a high-quality education that will prepare her for success on an Ivy League campus, she also wants to feel like she fits in at school. That’s tough, when no one there really understands what she’s going through. Kids in groups talk over each other, or mumble.

“I feel like I get annoying because I’m constantly asking people to repeat themselves and I feel bad about that,” Paige said.

It was such a challenge during her freshman year, that she didn’t even try out for the team this year.

“It frustrated me because I really love the sport,” she said. “It was so hard with the communication and everything. It just was a struggle.”

The things that she can’t get from Roncalli, she could get from the Indiana School for the Deaf. The state-funded school for students who are deaf or hearing impaired doesn’t have the academic rigor that Paige needs to get into Princeton or Yale, though.

If Paige were at a public school, she could take her academic courses there and take elective courses — maybe even join the basketball team — at the school for the deaf.

Currently, Indiana law doesn’t make the same allowances for students attending private schools. The family briefly considered transferring Paige to a public school, but said they didn’t want to Paige to lose out on her friends, rigorous academics and the Catholic education she can get at Roncalli.

“I didn’t want to harm her in that way.”

The “why” is most likely an oversight in the current law. Private schools haven’t always offered robust special needs programs (and some still don’t), so students who would make use of services at the School for the Deaf tend not to attend private schools. The issue just likely hasn’t come up before, said Rep. Bob Behning, R-Indianapolis.

“It wasn’t even thought of before,” Behning said. “She was a victim of the fact that we hadn’t thought far enough ahead.”

When the Moores ran into roadblock after roadblock, they turned to Paige’s principal at Roncalli, Chuck Weisenbach.

“Anytime you can’t provide services, it’s frustrating,” Weisenbach said. “Just from the sheer desire as an educator to help kids. It’s doubly frustrating when you have a family that passionately committed to your school.”

When Weisenbach ran into those same roadblocks, he turned to Behning, chair of the House Education Committee. They’d worked together on previous education policy issues, like private school vouchers and teacher pay.

Language was drafted and now that language is part of House Bill 1420, a larger education bill with various issues in it, sponsored by Behning.

“It was really, kind of a no-brainer,” he said.

The bill has passed the House and was heard in the Senate education committee Wednesday, where Paige and her mom testified for the second time. The Senate committee will vote on it next week. Should it pass, it will move to the full Senate for a final vote. It could be law by July, meaning Paige could start receiving services from the School for the Deaf next school year.

“I want to keep pace (academically) because I want to get into an Ivy League college,” she said, “but I feel like, socially the Indiana School for the Deaf would be good for me, with ASL and people that understand.”

Paige would be able to attend Roncalli for half the day, taking her core academic classes, and School for the Deaf the other half of the day for elective courses. She’d have people who could help her with sign language, which she’s taking online right now because Roncalli doesn’t offer an American Sign Language course.

If Paige gets her way, that could change.

After earning a degree from Princeton or Yale, Paige wants to come back and teach ASL at Roncalli.